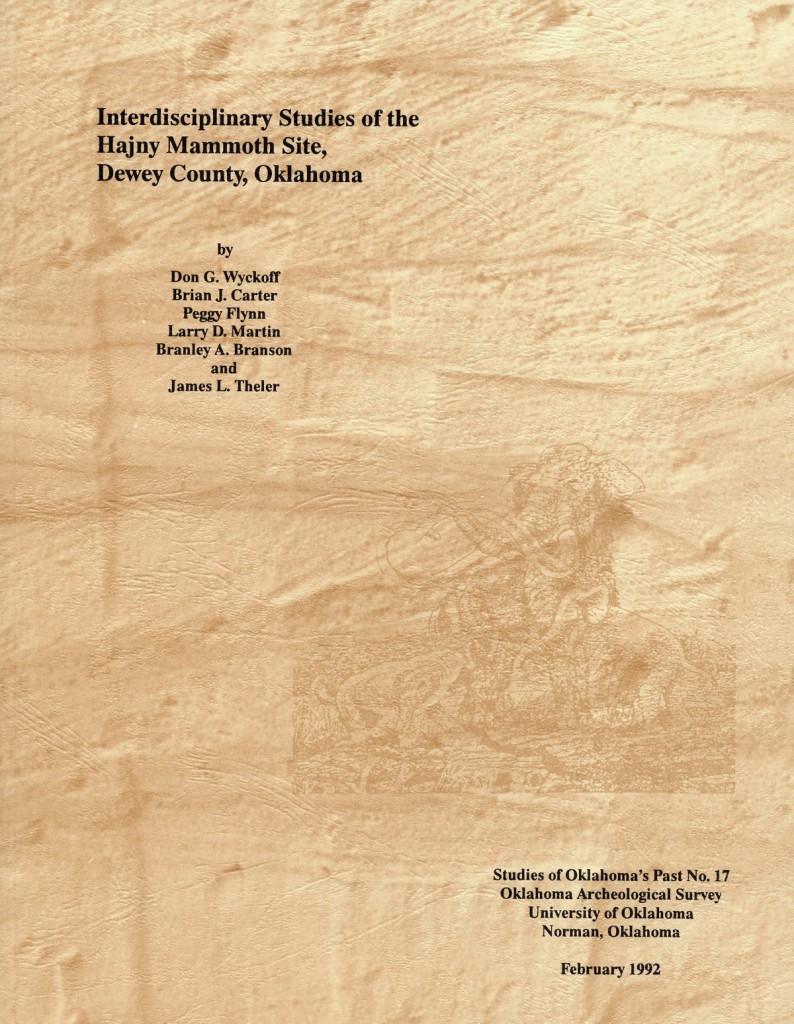 When gravel quarrying exposed mammoth bones buried deeply in a prominent terrace of the Canadian River in Dewey County, Oklahoma, controlled archeological excavations were undertaken to ascertain if the animals had been killed by Paleoindian hunters. Although no traces of humans were found, the site did yield a small, but intriguing, array of Pleistocene animals in an interesting geologic setting.
Manual stripping and extensive backhoe trenching revealed the presence of five ancient spring deposits. Located at similar elevations above the Canadian’s modern course and embedded within fluvial sands and gravels, these springs formed by upwelling ground water when the river was aggrading a terrace 35 meters higher than its modern flood plain. Two springs contained bones of Pleistocene elephants, but only those around Spring #2 were uncovered and studied in detail. Portions of two mammoths and scattered bones of turtles, frogs, a water rat, a wood duck, a pocket gopher, a horse, and a pronghorn were recovered there. Along with nearly a dozen taxa of aquatic and terrestrial gastropods, these fauna attest to a marshy setting and adjacent grasslands. A few species of gastropods and the water rat are indicators of cooler summers and warmer winters than today.
The mammoth bones were arranged and damaged by large animals and subsequent chemical and fluvial processes. The springs apparently existed temporarily during a period of floodplain stability before being covered with several meters of interbedded sand and gravel, after which nearly three meters of soil accumulated. Subsequently, soil and some underlying fluvial sediments were eroded away and mass-wasting of the hillside occurred.

Dating of the site remains problematic. The mammoth molars share attributes with both Mammuthus imperator and M. columbi. Experimental uranium series dating of the teeth enamel yielded results ranging from roughly 140,000 to 165,000 years ago, but radiocarbon dated samples of gastropod shells from two different springs indicate a Wisconsinan age of some 21,500 to 34,000 years ago. The form of water rat and the elevation of the terrace seem more congruent with the late Illinoian or early Sangamon age. Resolution of the site’s age awaits continued study of Pleistocene settings and fauna along western Oklahoma’s Canadian River watershed.