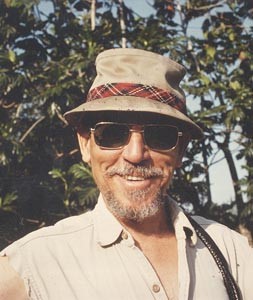 Charles C. Carpenter, PhD (1921-2016), “Chuck” to his friends and “Doc” to his 50 graduate students, fell in love with biology and herpetology at an early age. Chuck began his formal education at Northern Michigan University in 1939, graduated in 1943, and immediately joined the Army Medical Corps, but was never stationed outside the United States. Due to his stint as an army medic, Chuck entered medical school; however, he quickly realized that being a medical doctor was not the career for him. He then entered graduate school at the University of Michigan, where he received both his M.S. (1947) and his Ph.D. (1951), studying under Frederick H. Test. Chuck joined the faculty at the University of Oklahoma in Summer 1952, as an instructor at the Oklahoma Biological Station on Lake Texoma. This position led to a full-time Zoology faculty and Herpetology Curator position at the then Stovall Museum. He retired from both positions in December 1982, with 200+ publications. Over the course of his tenure as a curator and faculty member, Chuck led several student expeditionary trips (“safaris”) all over the southwest US and Mexico, and was also invited twice to do research on the Galapagos islands in Ecuador. Chuck is known for his ground-breaking work on reptile behavioral studies and has received numerous awards, including Oklahoma Scientist of the Year (1991), W. Frank Blair Eminent Naturalist Award by the Southwestern Association of Naturalists (1st recipient; 1986), Distinguished Alumni Award from Northern Michigan University (1972), and the Regents’ Award for Superior Accomplishment in Research and Creative Activity from the University of Oklahoma (1980). Chuck passed away on January 10, 2016.