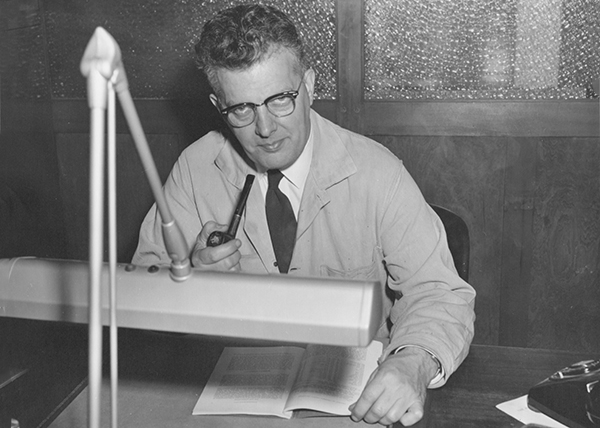 While we have attempted to ensure all information is accurate and as complete as possible, we are limited to what has been shared with us about Wilson and what has been published about him.

If you notice any errors or are aware of any additional professional or personal biographical information (including organizations, awards, hobbies) please add them in our Collection Forum or contact us to let us know.

Leonard “Dick” Wilson was born July 23, 1906 in Superior, Wisconsin where he grew up and became the first Eagle Scout in Superior.Dick attended the University of Wisconsin-Madison to obtain a Bachelor’s of Philosophy degree in Botany in 1930 including a year abroad at University of Leeds, Scotland. He continued at  the University of Wisconsin-Madison to obtain a Master’s of Science in 1932 and his Ph.D. on an analysis of plant microfossils in 10 bogs, Douglas County, Wisconsin as well as another extensive report, equivalent to another Ph.D. dissertation, on lake development and plant succession in the Highland District, Muskellunge Moraine, and the outwash area of Vilas County, Wisconsin. It was during his post-doctorate work at Ohio State University and the University of California at Los Angeles where he really began his studies of pollen. He is known as a pioneer in the field of palynology and the first man to perceive the common uses of palynology in oil exploration causing him to be an internationally recognized palynologist, known for his work on stratigrapghic palynology especially from coal and oil producing strata.

Wilson’s research focused on determining the composition and paleoecology of coals (peat swamps) and the collections extensively document the palynology of 11 of the 17 coal seams in Oklahoma. In addition to specimens from Wilson’s over 200 published papers, reports, notes and abstracts, the paleopalynology (fossil pollen) and paleobotany collection holds samples collected and studied as part of 50 Master and Ph.D. theses conducted under Wilson from 1960-1976 at the University of Oklahoma. Many of the samples and specimens, including type material, collected during his appointments from 1934-1977 (Coe College, Cedar Rapids, Iowa, University of Massachusetts, New York University, Oklahoma Geological Survey) also reside at the museum. Some additional specimens may be from his professional consulting/contract work for several (at least 17) major and independent oil companies in United States and South America regarding biostratigraphy and palynology during the period of 1945–1972. Many of Wilson’s and his collaborators publications describe localities that are no longer accessible either through mine abandonment or reclamation, new construction or flooding for irrigation.

In 1962 Wilson became the curator of Micropaleontology and Paleobotany at the Stovall Museum of Natural History (later the Sam Noble Oklahoma Museum of Natural History). He was curator from 1962-1977 and and active curator emeritus from 1978 until his death. During his tenure, the collections underwent significant growth from teaching, research and student activities even after he was no longer full-time faculty.

The museum acquired Wilson’s lifetime collection (including many collected during his previous academic appointments from 1934-1962) of specimens, field notes and publications and they make up a considerable portion of the collection. Partially because of the significant donations over the years to the museum, our collection is named “The Leonard R. Wilson Collection of Micropaleontology and Paleobotany” in his honor.

While Wilson may have died in Norman, Oklahoma on July 15, 1998 at the age of 92, his life-long contributions to science and well-respected reputation ensure that his legacy as a pioneer in palynology ensures that his name comes up when discussing the history of the study of fossil spores and pollen and our collection is a lasting repository of his career.

While we know that taxa have been named in his honor, at this time we are unaware of what the specific taxa are. We would be grateful to learn of any that you may be aware (please add them in our “Collection Forum” or contact us to let us know).